What a fun week!

We have had such a fun week...
On Monday we went to the library. Colton loves to color before story time starts. 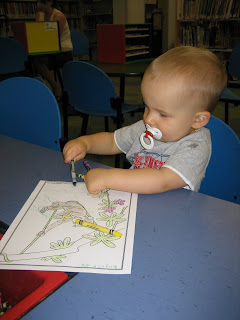 This week we played in tunnels after the stories were read and songs were sung. 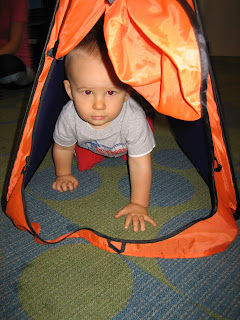 We played really hard at home. 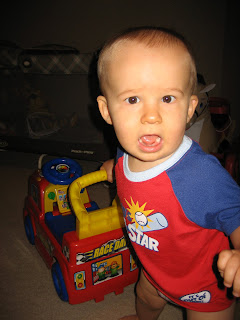 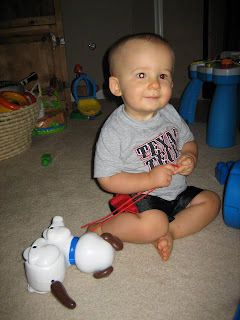 And Colton practiced walking all over the place! 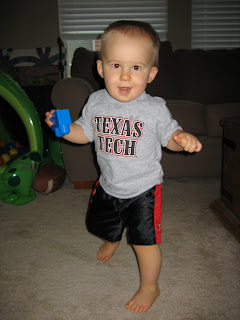 We had the Johnson gals over for a play date. 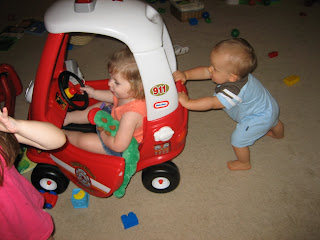 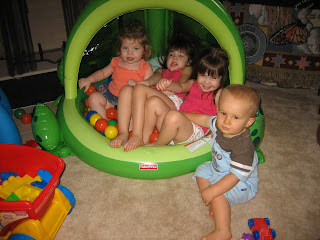 And Colton gave Maddie a kiss...such a ladies man! 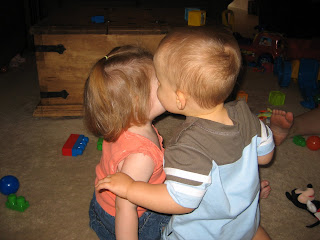 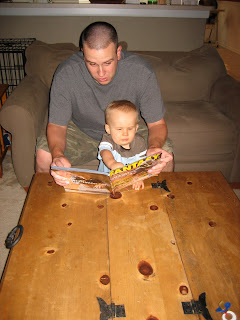 I have been debating on whether or not to post about this but I want to share with you how blessed we feel right now.
When Colton turned 6 months his head size jumped considerably. Since then, we have been monitoring his head growth. In 6 months, the growth went from the 75th % to the 99th % . At our one year check up his pediatrician wanted us to go and get a CT scan. She said she was pretty positive that everything was fine, but just to make sure, she sent us off with an order for the CT scan. I was scared but ultimately this is what I had wanted since she started showing concern about his head growth. I wanted to know that everything was okay, and deep down I knew it was. We called immediately and made the appointment for the very next day. They gave us very strict orders about what and when Colton could and couldn't eat and drink before the procedure. They also told us that he would probably have to be sedated because of his age. After making the appointment my anxiety about the procedure sky rocketed. Zak took off work and the next day we headed for the hospital. Everyone at Texas Children's was AMAZING, they were fast, kind, understanding, and excellent with Colton. In fact, the technician that ran the test was so awesome Colton didn't even have to be sedated. We left the hospital before our appointment was even scheduled and took Colton to a fun breakfast to celebrate how well he had done. A week passed with no results and all we could think was no results are good results. If anything had been wrong they would have called right away. We left for our trip to Lubbock and that's when we got the call from the pediatrician. She said that the scan showed excess fluid around his brain and that he had a cyst on the left side of his brain. Again, she said she wasn't overly concerned about what she saw but she wanted to send us on to a Pediatric Neurosurgeon at Texas Children's for a second opinion. I immediately stopped listening and started to panic. How could this be happening? I told her we would fly home and make the appointment with the surgeon right away. She told me that that wouldn't be necessary and said it wasn't urgent. I didn't care what she said, she was asking us to go and see a neurosurgeon for our one year old! Needless to say I was a complete mess for the rest of the trip. We were able to make the appointment for the 21st of August and until then we would just have to sit and wait. I'd have good days and bad days. I tried many times to get online and see what it all meant but I stopped myself every time. Zak told me not to worry but I couldn't help it, I am a worrier at heart. I knew he was worried as well but handling it much differently than I was. I would watch Colton play and wonder is that "normal"? Shouldn't he be doing this or that by now? It was always in the back of my mind that something could be wrong. It was a horrible horrible feeling.
The month passed and yesterday was the big, very anticipated day. We headed back to Texas Children's and met Dr. Whitehead. After some research, we knew we were in the best hands possible. He was great, full of knowledge and confidence. He went over Colton's scans and told us the best news possible..."He just has a big head." He said the fluid around his brain was simply just a little extra fluid, which is what happens when kids have large heads. He was pretty confident that the fluid would be gone by the time he was 2 and that the size of his head would probably stay a little large but would not continue to grow percentage wise. He was very unconcerned about the "cyst" either. I put it in quotes because he was not convinced that it was a cyst at all. He told us that even if it was a cyst it was common and that nothing would ever come of it more than likely. I know Zak and I had a permanent smile on our face the whole time we spoke to him.
After months of concern and worry it is all over, Colton is healthy! 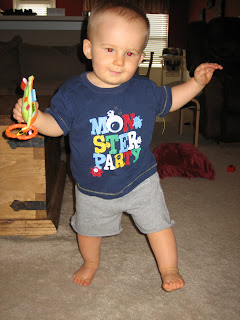 GOD IS GOOD!!!
(Thank you so much Nanny and Grandad for taking us out for such a special celebration dinner.)
Posted by Catherine at 10:03 AM 7 comments:

What I would have missed...

Yesterday was the first day back to work for all of my teacher friends. Instead of getting up early, rushing around, taking Colton to Nanny's and spending the day at work, I got to wake up early, have coffee while Colton ate breakfast, take Colton to library time, and then hang out with Nanny and Colton. While we were at the library, I looked around at all of the little ones dancing and playing and I watched Colton. I watched him watching the other kids, dancing, smiling and learning. It made me so happy to be there with him, I was so full of pride and joy watching him learn. How lucky am I to have this opportunity?!? Sure some days are tough, no naps, throwing food, fussy baby and a grumpy mommy, but most days are amazing! Today, I got to be there to watch Colton walk across the living room floor all by himself for the very first time!!! He has been taking small steps here and there for the last month but this afternoon I watched him take 12 steps from the coffee table to his ball pit. They were slow and small but 12 steps none the less!
I have been spending a lot of time researching things for Colton and me to do. We need to get out of the house and enjoy this time together. We have been going to library time every Monday morning and starting in September we are joining a MOPS group and a Kindermusik class. 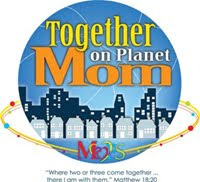 Catherine
I married my wonderful husband in the summer of 2005 (after dating for 5 years). We have an amazingly blessed life. We built our first home in Cypress Tx. in 2005. Our first son, Colton Reid, was born on June 24, 2008. Our second son, Chase Zakary, was born on May 24, 2011. I taught kindergarten for 6 years but resigned after Colton was born. Today, I work two days a week, teaching preschool, at a local church. Both boys were able to come with me while they were in MDO/preschool. It was an absolute perfect situation for us. Now my boys are both in Elementary and I still consider myself a SAHM. Teaching preschool a few hours a week is just icing on the cake. When I'm not at the church, I am volunteering at the boys school, hanging out with my mom and dad and sometimes, shopping at Target or TJMaxx. ;) 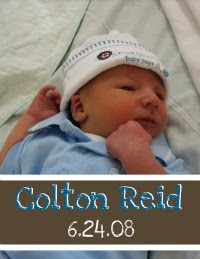 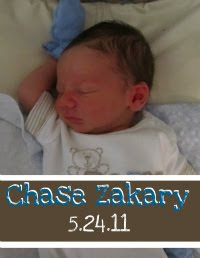